The class timetable is up and running now. In the first full day one we will be making beautiful zipped bags which have loads of pockets and plenty of room for 'stuff'. I'm running it as a newbie class because even though there are lots of components and some fiddly bits, including putting in zips, the designer has organised it in such a way that it can be put together quite easily. Added to that the classes very small so everyone will get lots of help if they need it. 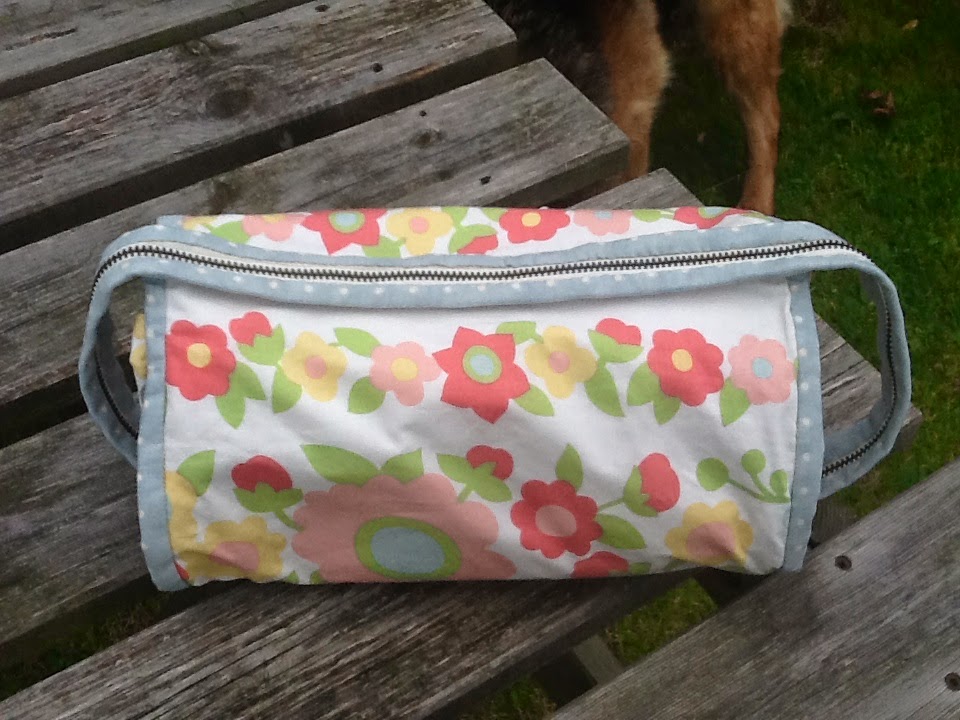 The bag can be used for all sorts of things, maybe a cosmetic/toiletries bag, or a gadget bag? 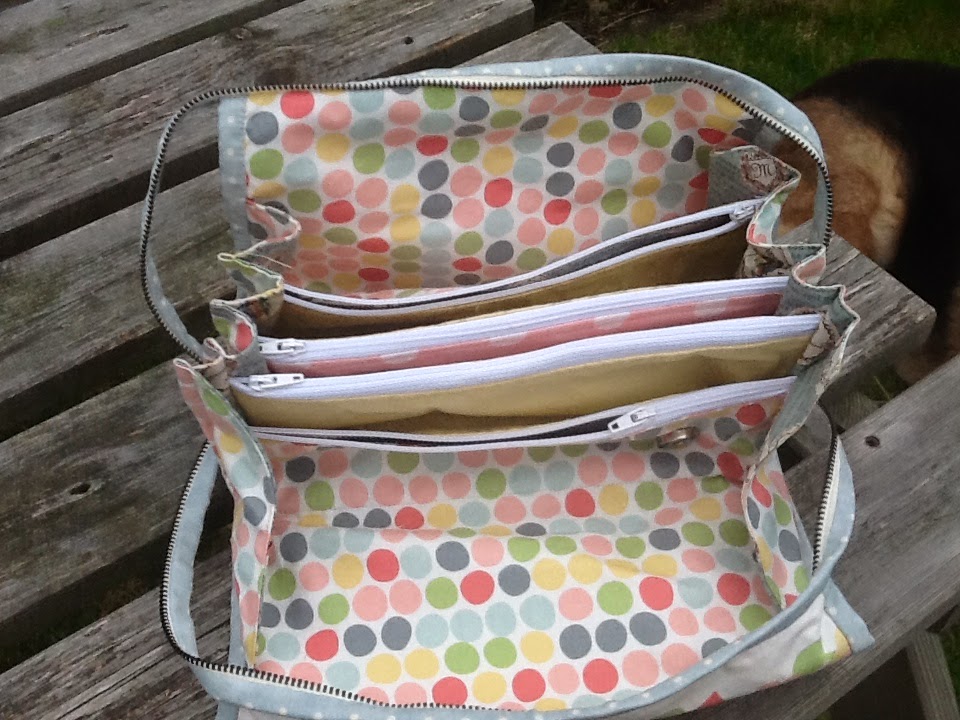 There are lots of pockets so maybe a gardeners bag, with room for seed packets, plant labels, string, secateurs and suchlike. 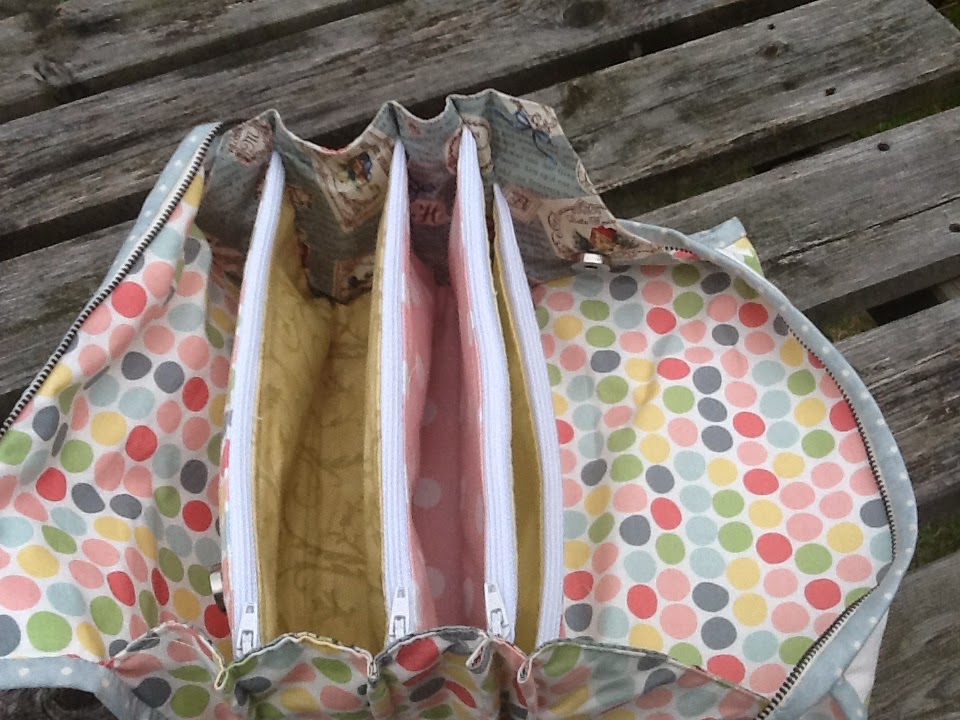 I'm going to be using mine as a sewing bag. There's lots of room for scissors, needles, pins, tweezers, reels of thread, screwdrivers, pens, pencils and all the rest of the paraphernalia that I seem to need to cart around with me!

Where does the time go

I can't believe it's been 3 weeks since I posted here! I blame the sunshine :)
I've been in to visit the girls at Lesley Carole's in Rhos on Sea, and in fact Cherry was sitting in the window watching the world go by. There are now loads of crafters selling their beautiful wares inside this shop so it's well worth a visit if you haven't already been in. 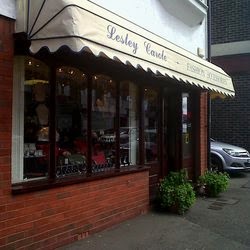 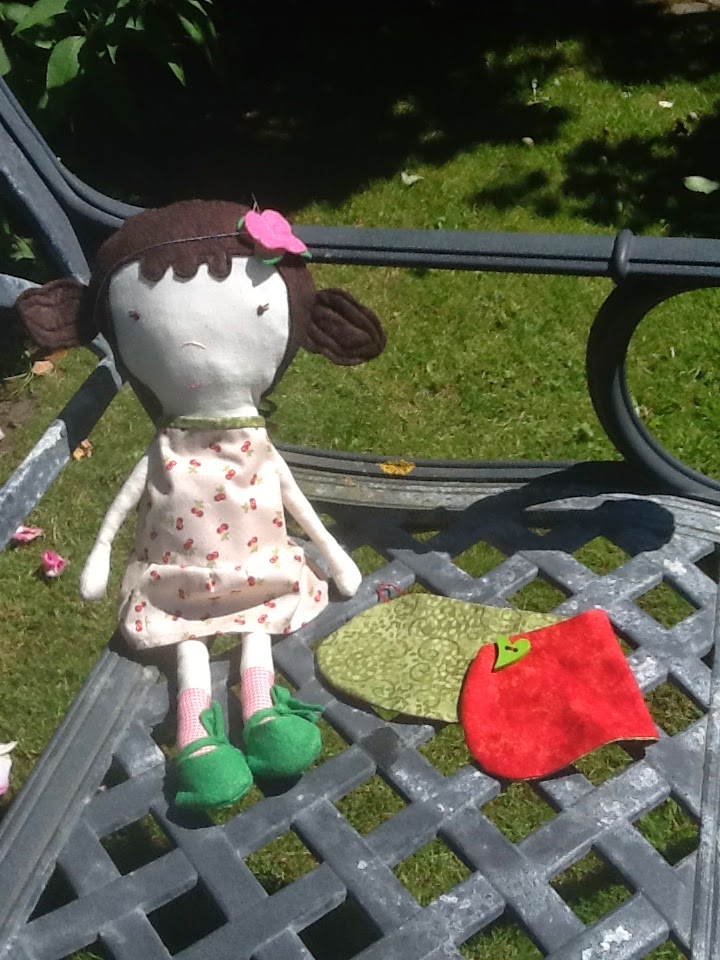 She has fixed knickers and socks, and removable shoes, dress, hairband and a reversible cape.

And this is her friend,  Little Red 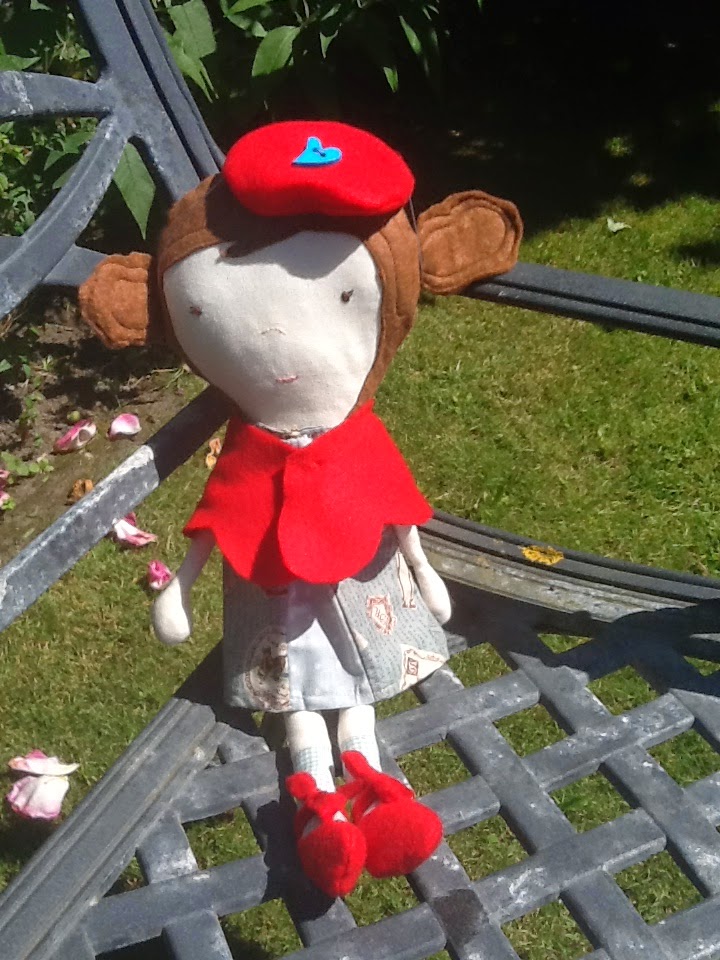 She also has fixed knickers and socks, with a removable beret, cape, dress and socks.

They are both about 42cms tall, about 16 inches and they are available either through our Facebook page or from Lesley Carole, Penrhyn Road, Rhos on Sea.
Posted by Lynne.W at 23:41 No comments:

I have a little bit of exciting news today. As of this minute 'A Couple of Crafters' ' lovely makes will be available in Lesley Carole Fashion Accessories shop, 2 Penrhyn Avenue, Rhos on Sea.

So far the squashy teddies are there for you to see but very soon there will be all sorts of goodies on view, and you will be able to order anything else you've seen and liked on the Facebook page too.  There are also lots of other items from local crafters, pop in and have a look if you're passing.

If you haven't yet been to Rhos it's a lovely place to pass the afternoon with some interesting little independant shops to browse as well as cafés, bakeries, fish and chip shops, and the beach too! 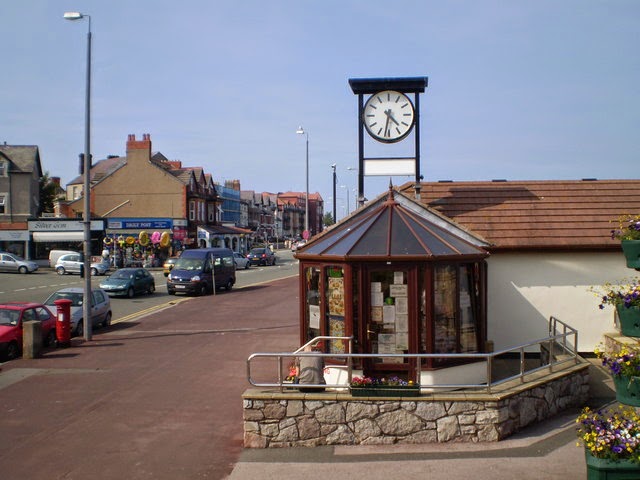 To show you what I've been up to this week.
I've made this little personalised bear, 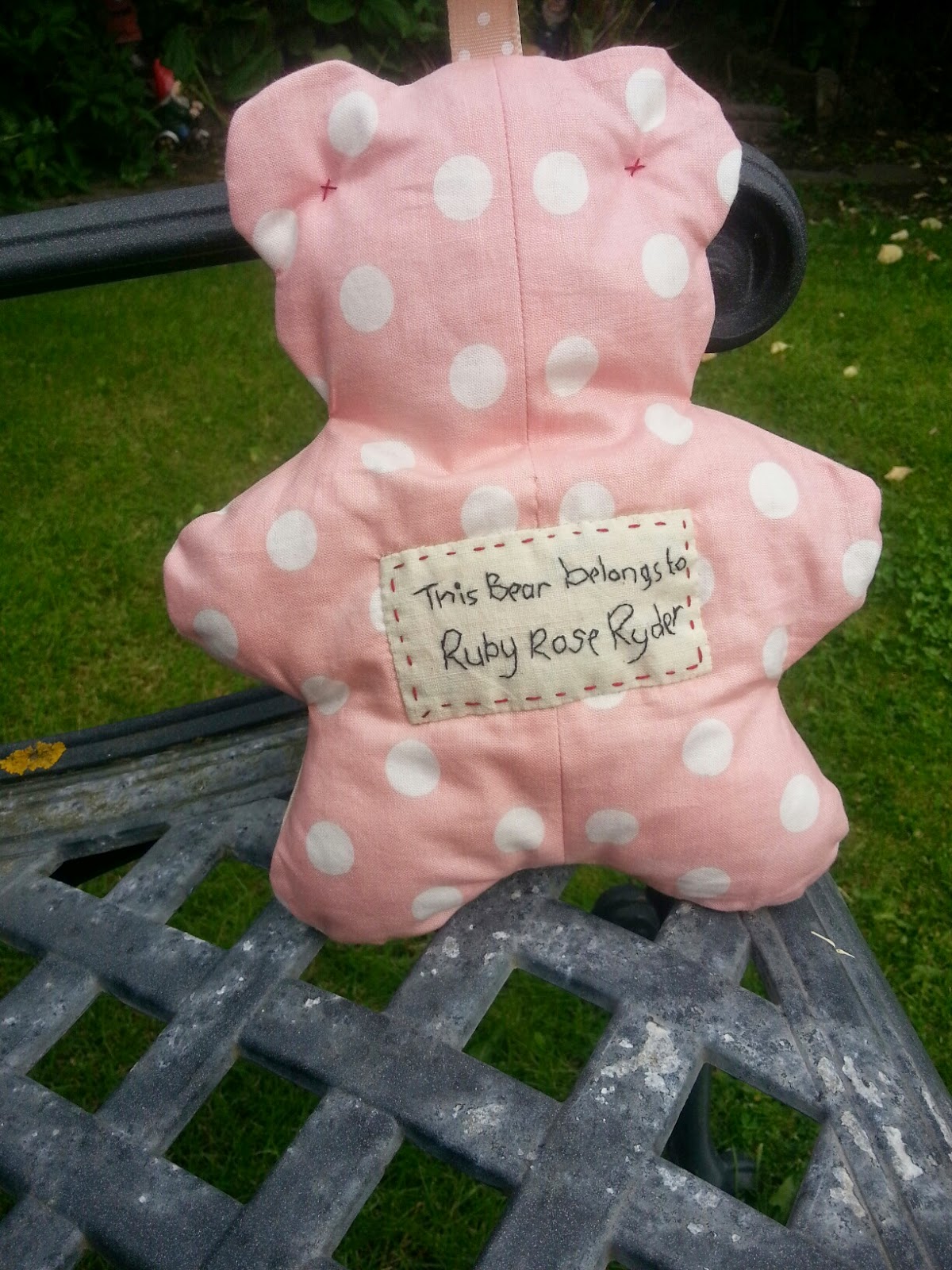 And this celebration table runner all ready to be 'autographed' by the wedding guests, with a fabric pen. (Excuse the washing line across the middle, it was the only place big enough to lay the runner out flat!) 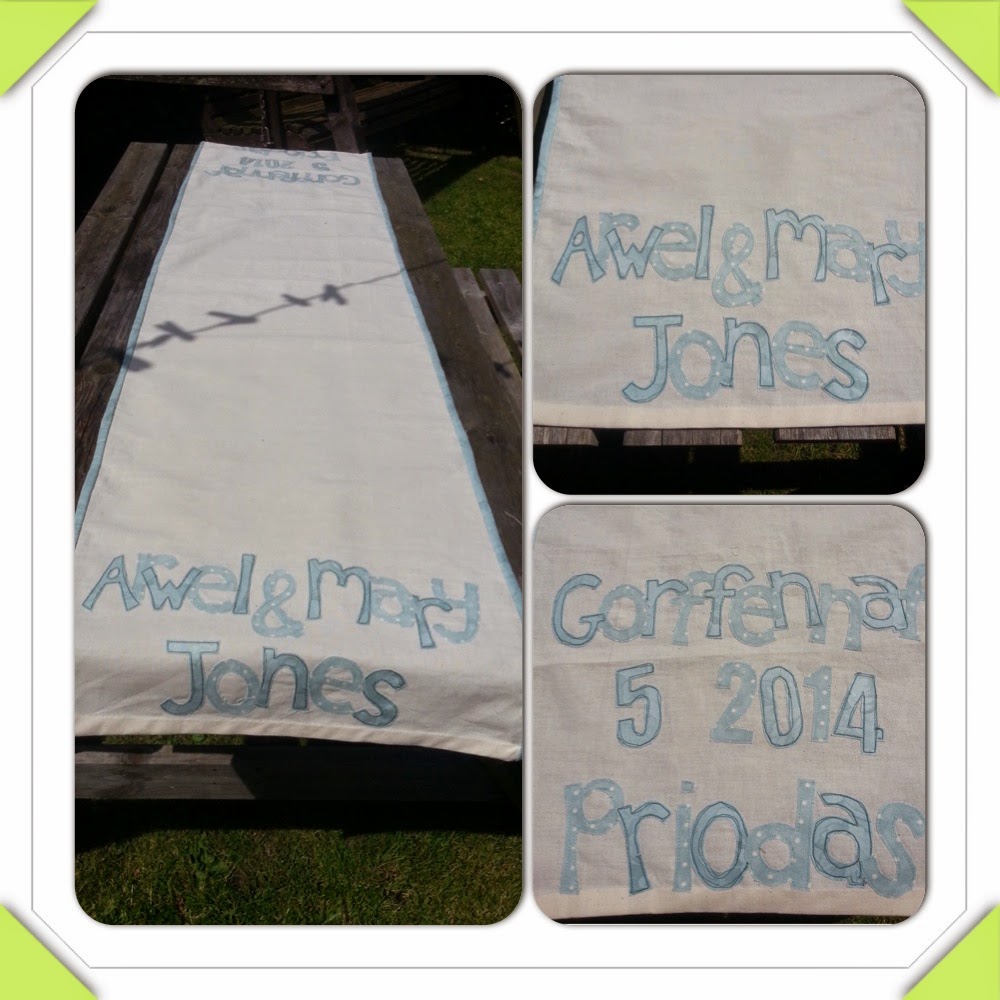 And I've finished this little cutie, who is now waiting to be picked up by her new owner. she really needs some buttons down her front but I know she's going to a baby, so I've left them off. 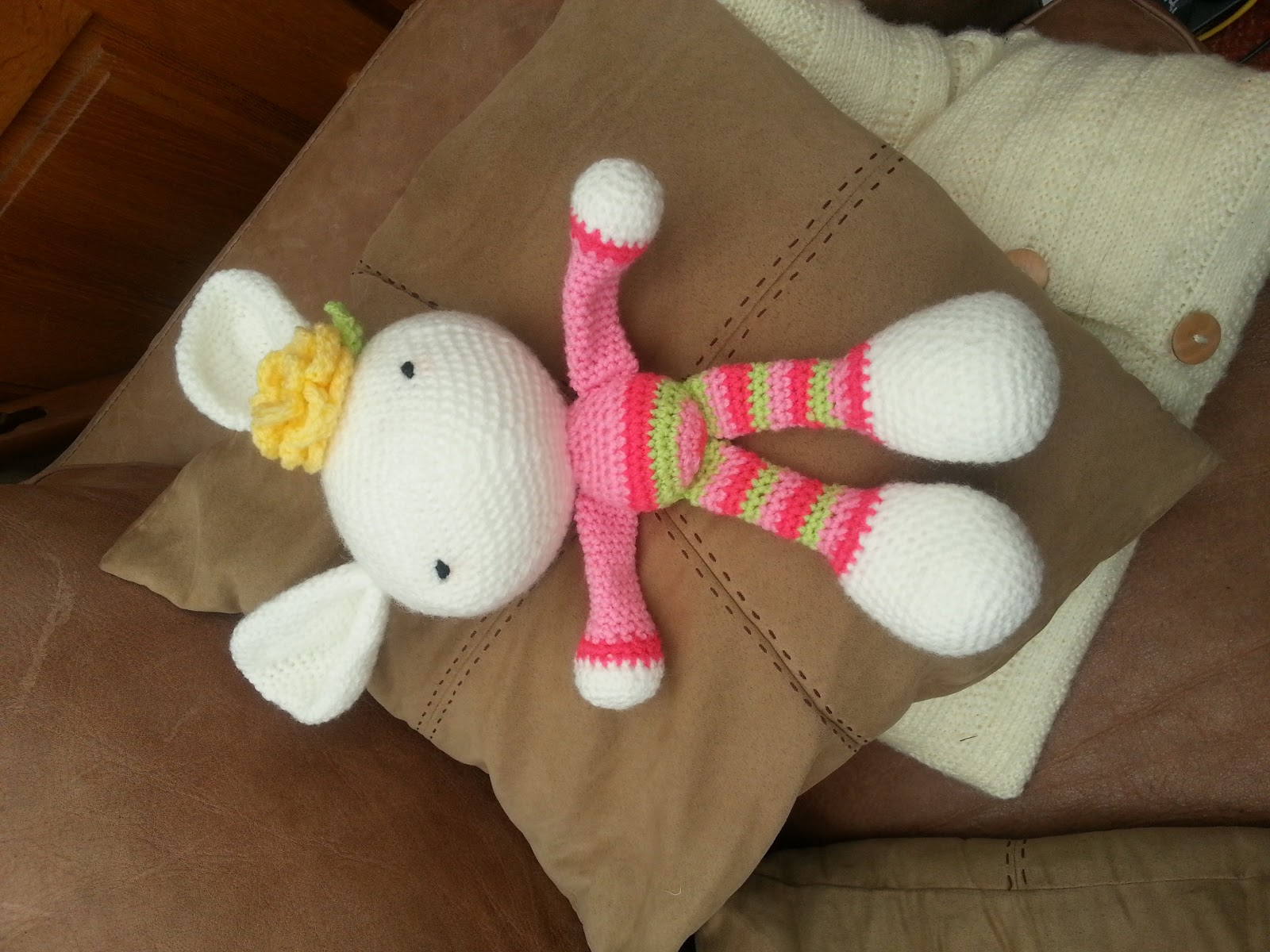 I'm also in the process of designing a 'mug rug' pattern ready for my beginners patchwork and quilting class. I'm trying to fit as many techniques as I can onto a small project to be completed in one day, with the idea that those techniques will be transferable to larger projects.

And hopefully there will be some exciting news soon about those little teddies, and some taglets, remember those?

Thanks to perfect (paint drying) weather I spent Wednesday finishing the beautiful new tables and chairs for 'Classes in the Cabin'. 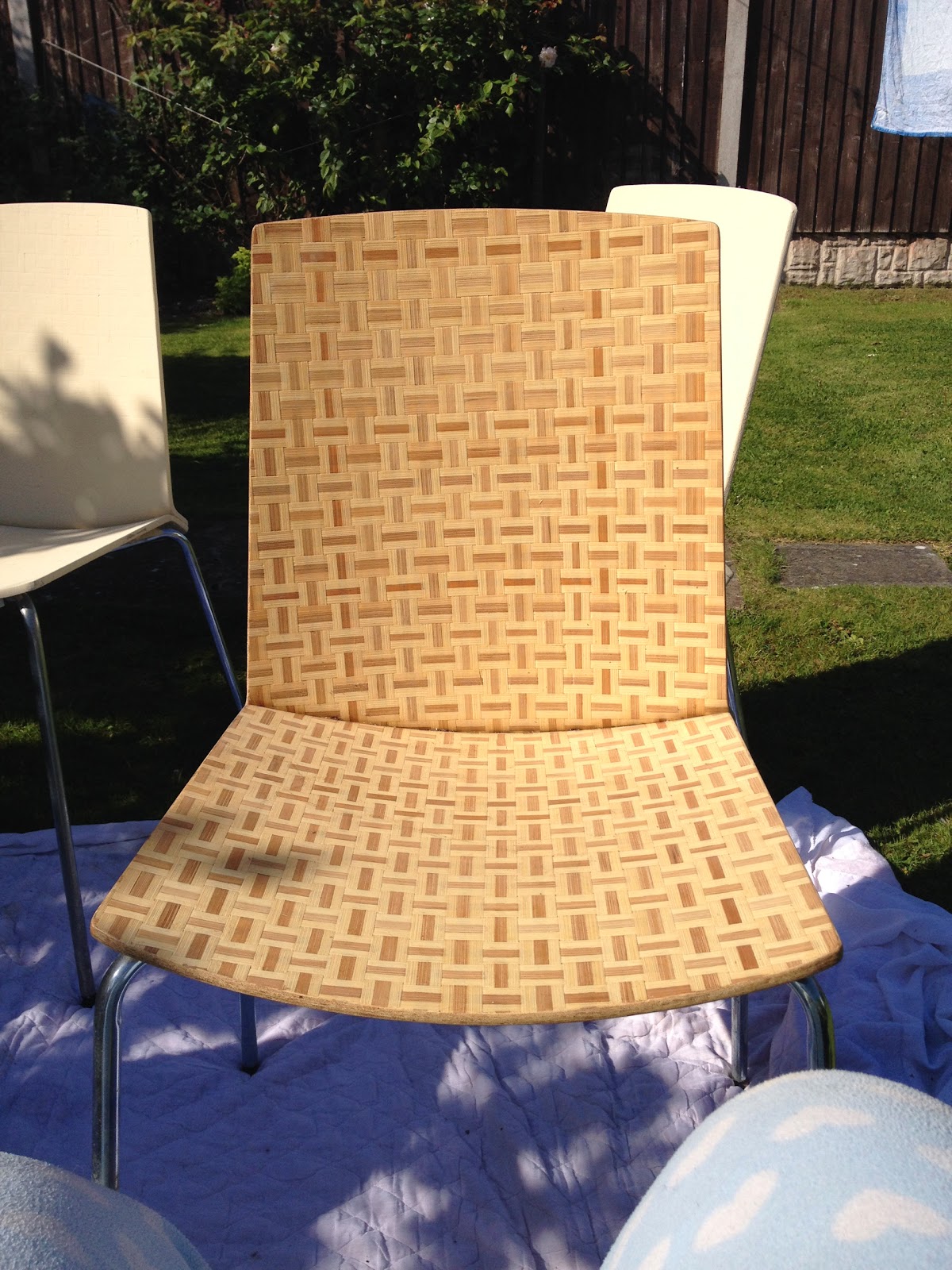 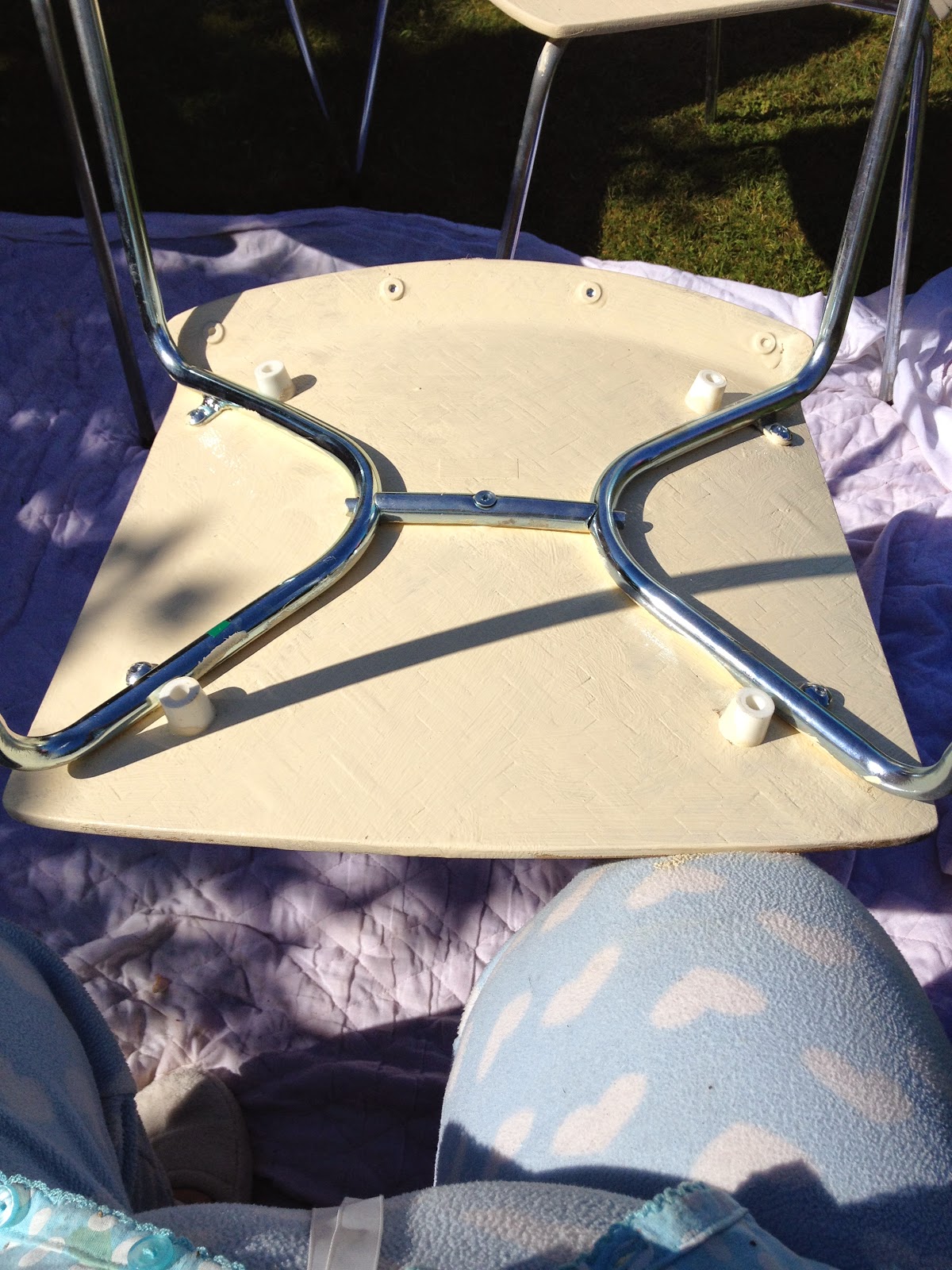 On Saturday I discovered a new blog here written by Amy. She has some lovely thing not least some really cute flat teddies, which she gives a link to for the pattern.
I was VERY taken with these teddies, I started 2 on Saturday afternoon for no other reason than I really liked them. I didn't get to finish them but I was so enthusiastic about them that I was up and on my sewing machine by 7:00 Sunday morning! I spent an hour machining but had no more time yesterday to finish so as you can imagine this morning my little fingers were itching to go, and ta dah!!......... 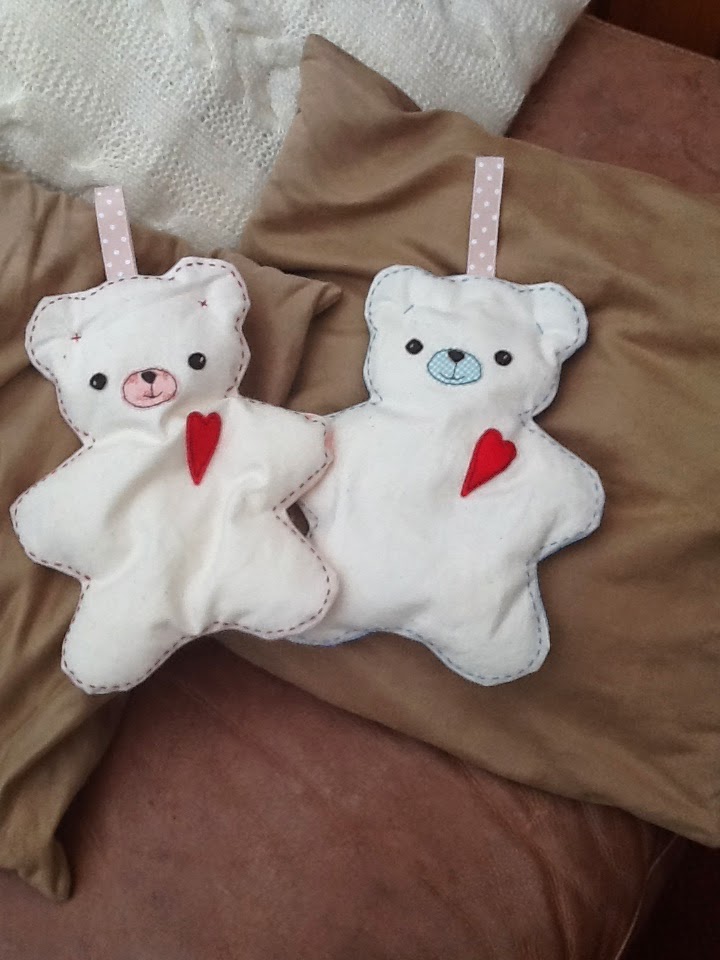 How seriously cute are these little teds? They are bigger than I expected somehow, about12"/30cm tall including their little tags, and I added a couple of little extras to Amy's fab design too. And I LOVE them. I love their squashy feel and their 'grabability', I love how simple they look! and I REALLY love...... 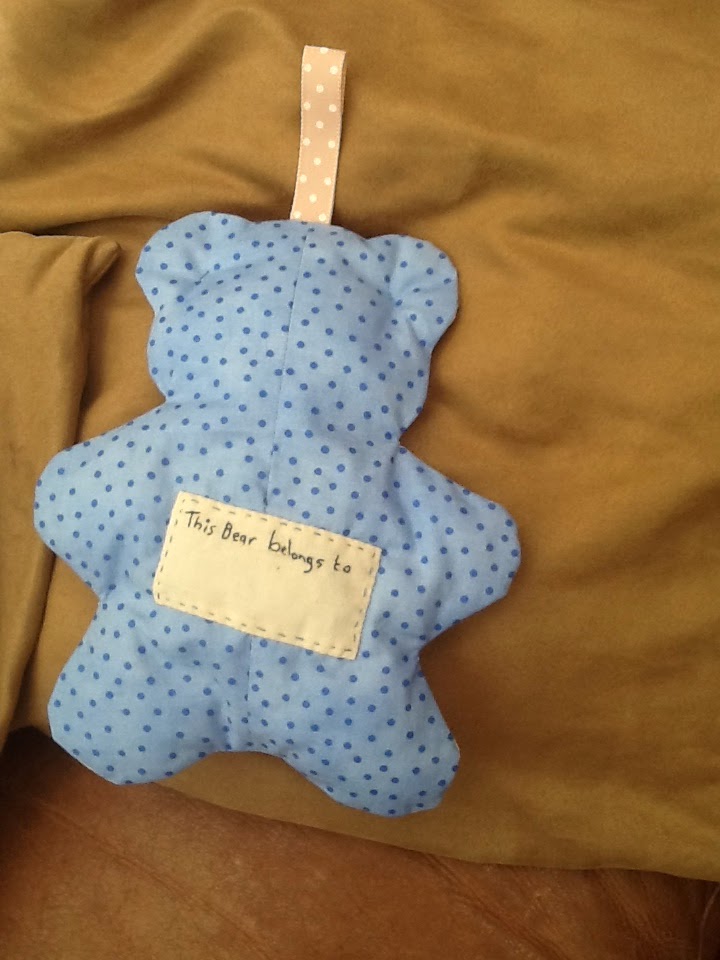 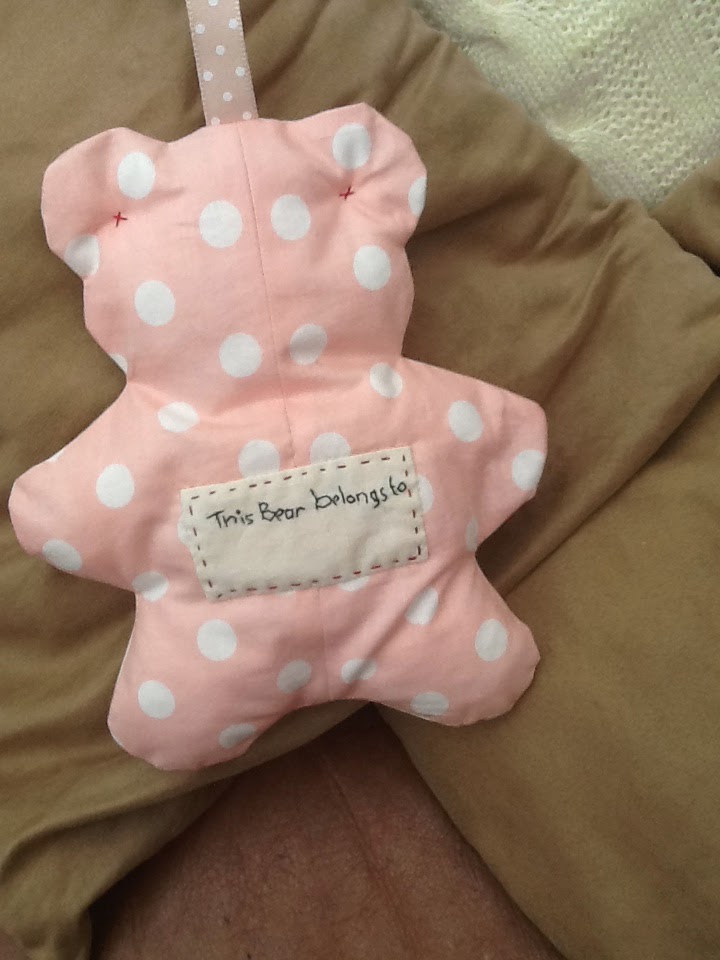 These will be available to order, assuming I can bear to part with them,( pardon the pun!), over here on our Facebook page.
Posted by Lynne.W at 13:07 No comments:

Email ThisBlogThis!Share to TwitterShare to FacebookShare to Pinterest
Older Posts Home
Subscribe to: Posts (Atom)
This blog has been set up as an attempt between the both of us to share our projects, tips, ideas and other inspirational material with each other.
It is mainly intended as a way for us to help each other with our pieces and also for us to keep all of our ideas in one easily accessible place, rather than constantly scrolling back through messages, photos and emails to find that one little bit of info that we knew had been shared, but where!
If this can also help someone else then that's good too.

Please stop by and say hello